The Zika Virus has been making a lot of waves lately and given that I will be heading down to Brazil soon I feel that I should learn as much as I can about it in order to determine if I should cancel. Even though it will be winter, El Nino and rising temperatures from Climate Change could result in a higher than normal mosquito population.

Nothing to Worry About?

In the vast majority of cases, Zika causes no symptoms at all and the most common symptoms do not appear to be a big problem. The Centers for Disease Control and Prevention’s page on the Zika Virus is a good source on the basics.

The most common symptoms of Zika are fever, rash, joint pain, and conjunctivitis (red eyes). The illness is usually mild with symptoms lasting for several days to a week after being bitten by an infected mosquito. People usually don’t get sick enough to go to the hospital, and they very rarely die of Zika. For this reason, many people might not realize they have been infected. Once a person has been infected, he or she is likely to be protected from future infections. – Centers for Disease Control

Of course, just because the majority of people will not experience severe negative effects does not mean it is not something to worry about.

Microcephaly has been strongly tied to the Zika Virus and while there is no definitive proof yet there is certainly reason to be worried that Zika may be causing the cases.

Here is a chart from Vox showing the increase in Microcephaly cases. 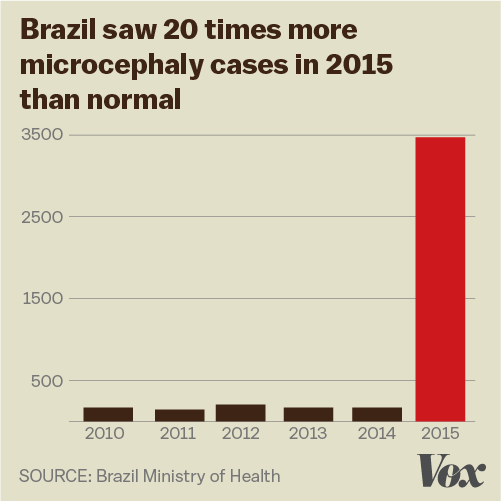 The CDC describes Microcephaly as “a birth defect where a baby’s head is smaller than expected when compared to babies of the same sex and age.” This leads to some obvious problems caused by a smaller than normal brain size. The CDC has a great resource on Zika and Pregnancy if you are pregnant or considering having children.

While this is definitely a terrible condition it does not greatly impact my decision to go to Brazil. However, Zika is now being considered an STD and as such safe sex has to be a priority both in Brazil and after returning.

Recently, scientists have reported that there is a link between the Zika Virus and Guillain-Barre Syndrome, a dangerous neurological disease. GBS is a condition where the immune system attacks the nerves, which can cause muscle weakness, loss of sensation and paralysis.

Thankfully the World Health Organization says that most people recover fully from even the worst cases.

This is probably the most worrying aspect of the disease for myself as it seems to be more common in adult men. Even so, I think with proper preparation and Travel Insurance for health services this is not enough to deter me from going.

Considering some common sense strategies to protect from mosquitoes will be important when preparing for my trip to Brazil. Using insect repellent, wearing light colored clothing that covers most of my body will be musts. The timing of my trip (winter) makes this a lot easier as it won’t be too hot for jeans or light pants, closed shoes and long sleeve shirts or even a sweatshirt at night. The World Health Organization has a good short quiz for understanding Zika.

Due to the Olympics in August and the Global pressure on Brazil there will be a lot of effort put into containing the Zika Virus. With that, preparation and the knowledge of the current (known) dangers it will not be effecting my plans to go to Brazil. However, I will be keeping a close eye on further developments just in case.

Get the latest updates sent straight to your inbox!

Success! Now check your email to confirm your subscription.

Getting into Travel Hacking

Going to Brazil is not going to be cheap. Prices[...]